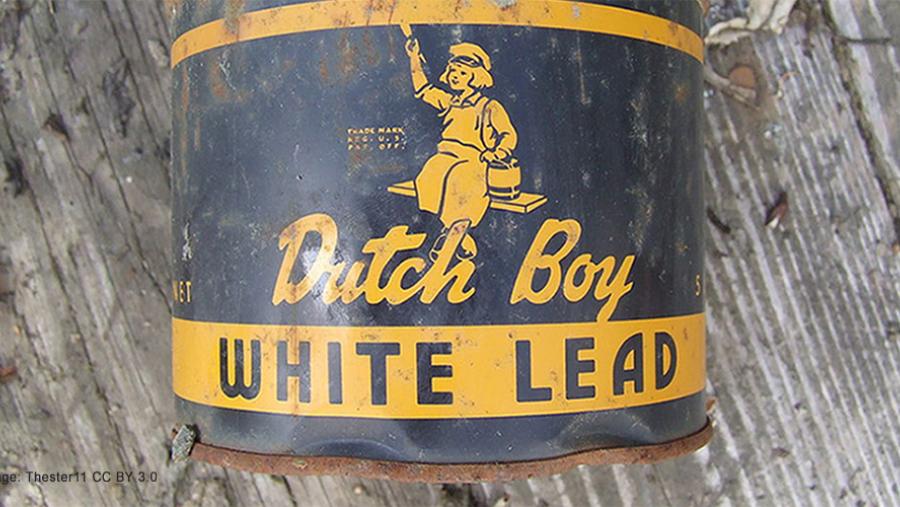 In Scott Walker's Wisconsin, lead chips have replaced cheese curds as the tasty snack of choice.

At least that's what one might think reviewing right-wing reaction to news revelations in the Guardian that Scott Walker may have secretly solicited $750,000 from Texas billionaire Harold Simmons. Simmons was the owner of numerous businesses including a lead pigment firm called NL Industries (formerly National Lead), which sold toxic paint and other products containing lead for decades.

The contributions, deposited into the coffers of dark money group Wisconsin Club for Growth, were followed by a sneaky (and unconstitutional) change to the law that attempted to retroactively nullify lawsuits brought by 173 poisoned children against NL Industries and other lead pigment manufacturers. The four word change was slipped into a 600 page budget bill with a "Motion 999" in the dead of night with no public notice. The fingerprints couldn't be clearer; the language was handed to legislators by NL's high-dollar lobbyist in a memo.

But you wouldn't hear any of this listening to Walker's defenders. "Who gives a damn about lead?" shouts right-wing talk radio host Vicky McKenna into the mic shortly after the story broke. "The lead case is over. Lead paint has not been manufactured since 1978."

McKenna fails to note that even today, thousands of kids a year are poisoned by lead paint in Wisconsin. And the problem disproportionately impacts poor and vulnerable kids living in run-down housing.

When confronted with allegations of potential pay to play Walker's spokesman demurred and the Governor Walker leaned in:

"Maybe in the world of politics it is shocking that politicians actually do the things they say they're going to do when they campaign, but I've talked about this for years. If I did something different than what I said I was gonna do, then voters would have a right to question. But I fulfilled the things I said I would do on this and many other cases."

Ah yes. Remember those campaign commercials when Walker explained he was going to unconstitutionally rip away away the legal rights of Wisconsin kids in order to help some out-of-state billionaire? Those went over well.

But the spin doesn't stop there.

The Guardian reporting indicates that Walker and top aides used the "independent" electioneering group, Wisconsin Club for Growth as a pot of secret money for the 15 recall elections sparked by Walker's bill to eviscerate public sector unions in 2011. Wisconsin Club for Growth board member Eric O'Keefe is proud of his group's $20 million dollar operation during the 2011-2012 recall period, which was under investigation by state prosecutors, and proud of the Texas billionaire ladling on the cash.

"The smearing of the late patriot, philanthropist businessman Harold Simmons is one of the more disgraceful aspects of the new 'leaks,'" O'Keefe told Wisconsin Watchdog, a media site he helped create and whose own staff was involved in running dark money during the recall period.

And Watchdog has its own theory: "The left's hatred for the late Dallas billionaire Harold Simmons is perhaps surpassed only by its animus for Wisconsin Republican Gov. Scott Walker. Both conservatives have been raked over the coals this week by the liberal corporation-hate machine in its faulty narrative of right-of-center corruption in Wisconsin politics."

Apparently the $750,000 secret payment by St. Simmons, whose bigheaded lobbyist Eric Petersen demanded the law change as a "Major EP Priority" in the memo given to legislators, was a plot by the left to embarrass Walker and Simmons.

The $750,000 included personal and corporate checks. This is significant because since 1905 Wisconsin has banned corporate checks in campaigns and elections. "These potential violations of our corporate contribution ban and a pay for play scheme must be investigated. These issues were not raised or considered previously, and the public deserves a thorough investigation," said Representative Chris Taylor (D-Madison) as she and 16 other legislators sent a letter to Madison District Attorney Ishmael Ozanne asking for an investigation.

O'Keefe and his cohorts in the right-wing echo chamber don't just defend secret money in politics, they get quite poetic about it. Wrapping dark money in the flag and the Federalist Papers, they argue in endless articles, books, and speeches, that "anonymous speech" goes back to the founding fathers and that secrecy of donors is essential to protect First Amendment rights.

You can hear the Koch Brothers cheering now.

But the American public has it right. They know that secret money hides the dirty deals and the embarrassing givers, the payday loan operators, Wall Street crooks, and other bottom feeders that bankroll Wisconsin Club for Growth and its ilk. That is why overwhelming majorities of citizens in both political parties support transparency in campaigns and elections. 84 percent of Democrats and 72 percent and Republicans want to limit the amount of money individuals and organizations can spend on campaigns and elections.

And the public isn't too fond of lead either. The disgraceful treatment of the children of Flint, Michigan caused a national uproar and state and federal investigations.

Wisconsin lead lovers defend it by saying it was "required" by the big bad government. But the truth is that over 100 years ago, paint manufacturers knew that lead was a "deadly cumulative toxin," but they still lobbied to get governments to require its use in pipes, paint and other products. Since the 1920s, the industry has battled bans, restrictions, and even warnings labels as children suffered catastrophic poisonings and brain damage. Even today, old lead paint is still the most significant source of poisoning for children.

Now they say the "big government" made them do it, but the record is clear, and the result is that today in Wisconsin Walker's own Department of Health Services (DHS), says that 21 percent of children under the age of 6 suffer from lead poisoning.

The scheme to strip Wisconsin children of their legal rights, failed. The retroactive cancellation of the lawsuits brought by 173 children was struck down as unconstitutional by state and federal courts and Wisconsin kids are still in court with their attorney Peter Earle battling to hold the industry accountable for the harms it has caused.

But Walker's DHS steadfastly refuses to adopt lead-poisoning standards consistent with federal standards even though they are required to do so, says Rep. Taylor who has been fighting for the change.

Now we know why.

How can an insane, really tyrannical insensitive thinkers, and dishonest men like Scott Walker persist in selling out his own state, and citizens to wealthy corporations? Helping them monopolize, and aiding their unions, while destroying workers unions, and teachers unions, and stealing pensions? Even by allowing corporate predators to freely exploit his own citizens. Is this movement of popular evangelism, Corporations united, so popular, that no one sees it as an evil dishonest movement to destroy their own freedoms, constitution and government? Is the robbing of the poor to give to the wealthy, not totally transparent, or so obvious they their blind followers do not want to see it or really believe in trickle down economics as a valid social, and workable science ? How can anyone believe cutting taxes for the most wealthy many who hide their profits in off shore accountants, will really help their poor, middle classes,nation and state, or produce more jobs and raise wages?