Like a Breath of Fresh Air, Youth Climate Strikes Lift Off in 125 Countries | PR Watch

Like a Breath of Fresh Air, Youth Climate Strikes Lift Off in 125 Countries 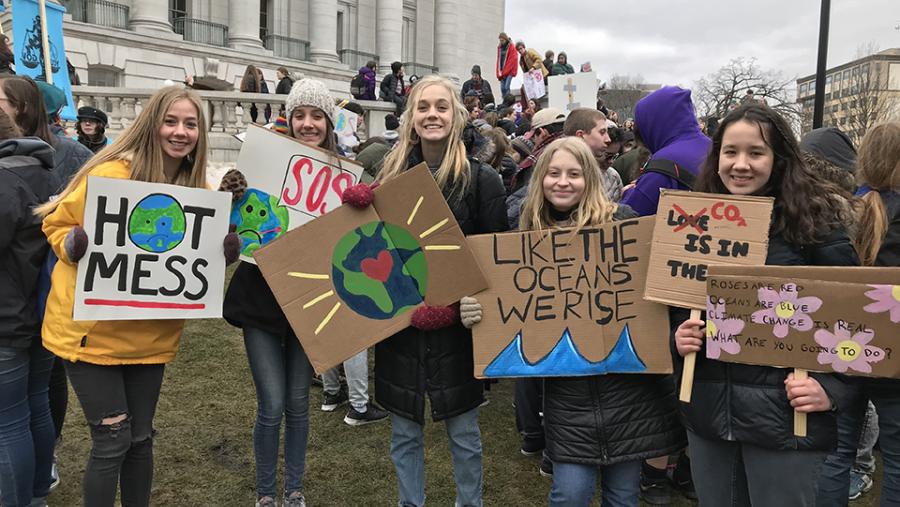 Over a million young people in more than 125 countries left their schools on Friday demanding that the world's politicians take decisive action to address the climate crisis. It was the world's first global climate strike.

They were inspired by Greta Thunberg the 16-year-old climate activist in Sweden who pressured the Swedish government to pass legislation to reduce carbon emissions in line with the Paris Climate Accord. This week Thunberg was nominated for a Nobel Peace Prize.

By Thunberg's count, young people struck in 2,052 communities in 125 countries on all continents. From small actions, like the one held by scientists in Antarctica, to mass mobilizations in Dublin, Berlin, Brussels, Barcelona, Milan, London, Montreal, Washington, and Los Angeles, the activists held signs with common themes "Denial is not a policy," "There is no Planet B," "Change the Politics, Not the Climate," "I'm with her" depicting Mother Earth and many more. One sign said simply "11 years," the amount of time that U.N. scientists say that we have left to avoid catastrophic climate disruption including to the world's food supply.

In the United States, activists from around the nation organized climate strikes for the first time. Two to three thousand students ditched classes to march to the beautiful state capitol in Madison, Wisconsin, the scene of many mass protests over the last eight years.

Congressman Mark Pocan was a rare adult invited to speak to the strikers. He mentioned working with New York Rep. Alexandria Ocasio-Cortez on the Green New Deal, and her name prompted an enormous response from the crowd. "I'll let her know," he said.

"We must transition to renewable energy, net zero greenhouse gas emissions, clean air and water for everyone and we can do all this by creating millions of high paying jobs right here in the U.S. and ensure economic security for everyone," said Pocan.

The students plan to bring a Green New Deal resolution to Madison's City Council next week.

Lily Radick from East High School spoke of the change that could be affected by a Green New Deal. "We can lead the green revolution ... we can upgrade our power grid, we can shut down our coal mines and plants, we can get rid of all drilling and usage of fossil fuels, while providing more jobs in clean energy industry."

Other students expressed frustration as how bad the situation was and frustration with politicians and policy makers who had refused to take action.

Ma'iigan Wolf Garvin, an East High School Student of the Ho-Chunk Nation, cautioned that "the native communities who have passed down the practice of giving back and living with the earth for their entire histories are losing their lands to floods and droughts, their water to pollution, their sacred crops and animals to rising temperatures."

"I have 370 ppm tattooed on my arm. That was the carbon in the atmosphere in the year when I was born, 1999," said University of Wisconsin student Vic Barrett, a long time climate activist who attended the COP24 U.N. conference. "The general consensus among scientists say is that we need to be at 350 ppm for a sustainable future. Youth today has literally been born into a world past the point of its ability to sustain us. If you ever feel down, if it ever feels too big, know you have the power of an entire generation on your side."

"I am frustrated that our generation literally has to save the world because of the mistakes of those before us... Sometimes I let that frustration sit inside of me and make me feel helpless, but this strike is my turning point, we have to put our frustration into action," said Ella Roach, a Middleton High School senior.

After the rally, the students went into the capitol building and demanded to speak to the GOP leadership of both houses, but were rebuffed resulting in the temporary occupation of the outer Assembly chamber. Students left post-it notes in the hallways with messages from the profound "I strike because I want to live to be 40," to the practical "I strike because I want to swim in our lakes."

Democratic Governor Tony Evers was not at the capitol Friday afternoon, but he has included numerous provisions in his budget to advance climate action and the students were welcomed on Twitter by Lt. Gov. Mandela Barnes. The budget sets forth a goal that all electricity produced within the state should be 100 percent carbon-free by 2050, creates a new office to administer clean energy research grants, and allocate $75 million in bonding to fund energy conservation in state-owned facilities. But even these modest goals might be rejected by the GOP leadership that has failed to even acknowledge a climate crisis.

Before the end of the long day of historic climate marches, Evers was forced to declare a state of emergency in Wisconsin as rapid weather changes had caused dangerous flooding in many parts of the state.