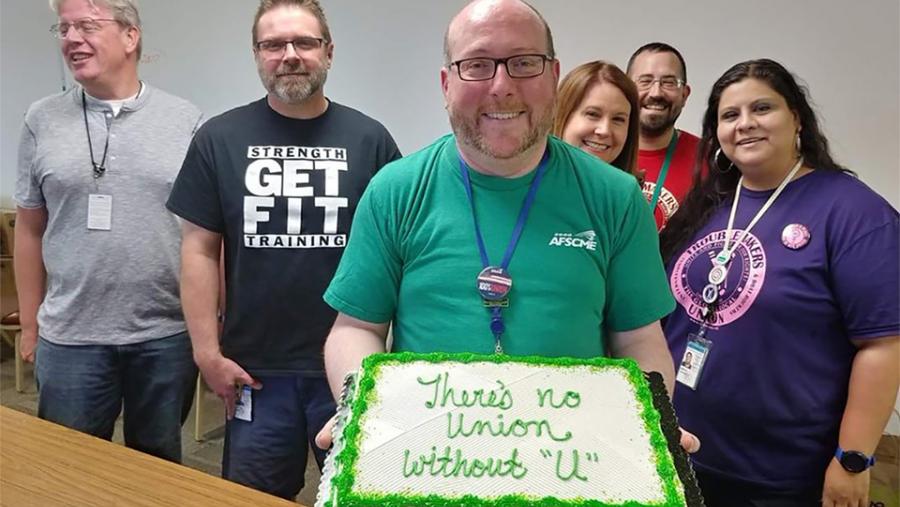 The same corporate-funded groups that bankrolled a successful ten-year campaign to cripple public employee unions by having the U.S. Supreme Court strike down "fair share" fees for nonmembers in Janus v. AFSCME last year are now suing to retroactively recover fees paid before the Court's ruling.

This is the latest move in the right-wing's quest to "defund and defang" public sector unions with a goal of delivering a "mortal blow" to progressive politics, and mirrors similar "clawback" suits filed across the country over the past year.

Two groups that spearheaded the Janus case, the Liberty Justice Center (LJC) and National Right to Work Legal Defense Foundation (NRTWLDF), have now filed a federal lawsuit in Illinois seeking repayment of $2 million in fair share fees paid by 2,700 Illinois public employees to the American Federation of State, County and Municipal Employees (AFSCME) between May 1, 2017 and June 27, 2018.

Public employee unions are required to represent all workers, whether they join the union or not, so unions have collected "fair share" fees, also known as agency fees, for many decades to cover the basic costs of bargaining for higher wages and benefits. That practice was upheld by the Supreme Court unanimously in Abood v. Detroit Board of Education in 1977, but the Court turned its back on that precedent in the Janus case and struck them down on First Amendment grounds.

A similar lawsuit by the two groups filed in a different federal district court was thrown out earlier this year when the judge ruled that AFSCME had collected the dues "in good faith."

"That ruling echoes what more than a dozen other federal and state courts have decided in similar cases," AFSCME spokesman Anders Lindall told the Chicago Tribune. "The anti-worker, corporate-funded front groups prolonging this failed litigation want to use the courts to further their political attack on working people and our union. Their repeated lawsuits are nothing but a greedy grab for more."

In its Janus decision, the Court's majority acknowledged that public sector unions would now have to represent nonunion members even without their agency fees, creating an entire class of free-riders.

With respect to both lawsuits and the earlier Janus case, public sector unions note that the plaintiffs never complained about receiving the wage increases, health insurance coverage, vacation time, and other benefits that the union negotiated for on their behalf.

In addition to the new lawsuit, LJC and NRTWLDF have appealed the original case to the U.S. Court of Appeals for the Seventh Circuit.

Lawsuits Bankrolled by Corporate Foundations and a Megadonor

Richard Uihlein, an Illinois businessman and GOP megadonor, the Koch brothers' donor network, and the Milwaukee-based Bradley Foundation have bankrolled much of the groups' legal war on public sector unions.

The LJC, part of the right-wing Illinois Policy Institute at the time of the Janus ruling, has received $1.7 million since 2010 from the Koch donor network's funding vehicles, Donors Trust and Donors Capital Fund, and $320,000 since 2009 from the Bradley Foundation, which the Center for Media and Democracy (CMD) exposed in a series of articles in 2017.

Uihlein has given over $8.6 million to Illinois Policy Institute since 2009 and at least another $800,000 since 2014 to LJC. Uihlein is notoriously anti-union and spent millions to support the gubernatorial campaigns of the anti-worker governors Scott Walker and Bruce Rauner.

LJC is a member of the State Policy Network (SPN). In the states, SPN groups peddle cookie-cutter "studies" to back the American Legislative Exchange Council's (ALEC) agenda.

Bradley Foundation grants to SPN "affiliate" and "associate" members stretch back decades and amount to approximately $133 million, according to Bradley grant summary documents tallied by CMD.

A 2016 Bradley internal file on SPN notes that SPN's focus in recent years has been on "catalyzing further efforts to curb public-sector unions' excesses" and "mobilizing nonprofits, donors and citizens to uphold the principles of donor privacy and freedom of speech." The right-wing effort is part of a concerted campaign to bankrupt unions in order to cripple the Democratic Party and, more broadly, the progressive movement.

The new wave of legal assaults on public employee unions as we head into the 2020 elections appears to be the latest stage of that campaign.