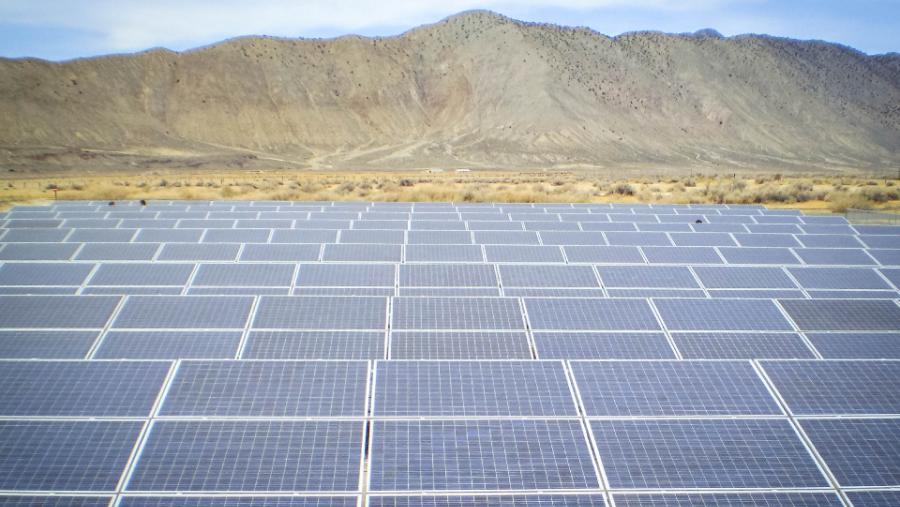 Vice President Joe Biden's victory over President Donald Trump has grabbed the most headlines in recent days, but climate change was on the ballot in several states and cities in 2020 as well. In general, green initiatives won, although in some cases, including in Alaska, oil interests thwarted a climate-focused agenda.

To become law, Nevada requires citizen-initiated constitutional amendments to pass in two successive elections, and 2018 was the first instance for the renewable energy standard measure. While very little money appears to have been spent on the measure this year, 2018 saw a torrent of outside spending, with California billionaire Tom Steyer's NextGen Climate Action spending $10 million in favor and GOP megadonor Sheldon Adelson's Las Vegas Sands casino company spending $22 million in opposition, according to data compiled by the National Institute on Money in State Politics.

In 2019, the state legislature passed Senate Bill 358, which also requires utilities to generate 50 percent of electricity from renewable sources by 2030 and plans for a totally carbon-free energy system by 2050. Question 6 would protect these initiatives from potential future backtracking by the legislature.

In New Mexico, voters approved a measure to depoliticize its regulatory body, which has tried to hamper the state's clean energy law. Amendment 1 will convert the Public Regulation Commission from a five-member elected body to a three-member commission, appointed by the governor and approved by the state Senate.

In 2019, Democratic Gov. Michelle Lujan Grisham signed the Energy Transition Act, which promised to double renewable energy use by 2025, require 50 percent renewable energy by 2030, and mandate 100 percent carbon-free electricity generation by 2045. But Grisham said the commission was “throttling job creation” by slowing down the retirement of a San Juan coal plant and the adoption of other clean energy measures.

The state Republican Party opposed Amendment 1, but the opposition didn't garner much financial support. Proponents of the measure got help from national groups such as America Votes, the League of Conservation Voters, and the National Education Association.

Voters in Columbus, Ohio overwhelmingly approved a measure requiring American Electric Power to offer net-100 percent renewable energy by 2023, making it the third-largest city to enact such a program. The numerous proponents of Issue 1 included the Ohio Environmental Council Action Fund, Natural Resources Defense Council Action Fund, the Coalition of Black Trade Unionists, and the AFL-CIO, while the Ohio Coal Association opposed it.

In Boulder, voters narrowly passed Question 2C, which enters the city into a 20-year franchise agreement with its electric utility, XCel Energy, as opposed to creating its own city-run utility. The Boulder Chamber of Commerce supported the measure, while Empower Our Future, a group in favor of the city creating its own municipal utility that includes the local Sierra Club chapter, opposed it. Most donors to the No on 2C for Local Power campaign were individuals, but environmental advocacy group 350.org contributed $1,000.

Big Oil suffered a loss in Louisiana, as an industry-backed amendment that would have amended the state constitution to allow manufacturing companies to negotiate payments to local taxing authorities instead of paying property taxes. The measure, Amendment 5, was rejected by 63 percent of Louisiana voters. It would have benefited Sempra Energy and several foreign companies that own the Cameron liquefied natural gas terminal in the coastal town of Hackberry.

The National Education Association provided the bulk of the funding for a committee that opposed Amendment 5, LA Taxpayers Education Fund, contributing over $600,000 according to state campaign finance records. Strategic Victory Fund IE, based in North Carolina, donated $200,000, and a California-based group called the Green Advocacy Project added $100,000. Washington, D.C.-based super PAC Future Forward, which spent mostly in favor of Joe Biden this year, reportedly bought TV ads opposing the amendment. Activist group the Louisiana Bucket Brigade rallied opposition to the measure, and Together Louisiana, a grassroots coalition of 250 religious congregations and civic organizations, lobbied against it.

The city of Long Beach, California approved a tax on oil producers to fund racial equity programs. The measure increases the tax on oil barrels produced in the city from 47 cents to 62 cents, an increase that will raise an estimated $1.6 million for Long Beach's general fund each year.

In Alaska, however, residents are on track to vote down a tax on oil producers named the Fair Share Act. ConocoPhillips, ExxonMobil and Hilcorp Alaska, companies that, along with BP, provided nearly all of the $18.8 million raised by the OneAlaska coalition, which opposed it. According to data compiled by the National Institute on Money in State Politics, Exxon spent the most ($5.5 million), and BP, which is looking to sell its Alaskan assets to Hilcorp, contributed $4.5 million. Other top donors include ConocoPhillips ($4.1 million), Hilcorp ($4 million), the Alaska Oil and Gas Association ($500,000), and Chevron ($275,000).

National conservative advocacy groups contributed smaller amounts to another committee opposing the Fair Share Act, including the Republican State Leadership Committee ($50,000), Club for Growth ($45,000), and the Koch-funded Americans for Prosperity ($45,000).

In contrast, proponents of the measure raised only $1.4 million, over $1 million of which came from oil and gas attorney Robin Brena, who chaired the group that proposed the measure, Vote Yes for Alaska's Fair Share.

Opponents claimed the tax would kill jobs, while proponents said the opposite and argued that it would close a massive state budget shortfall.