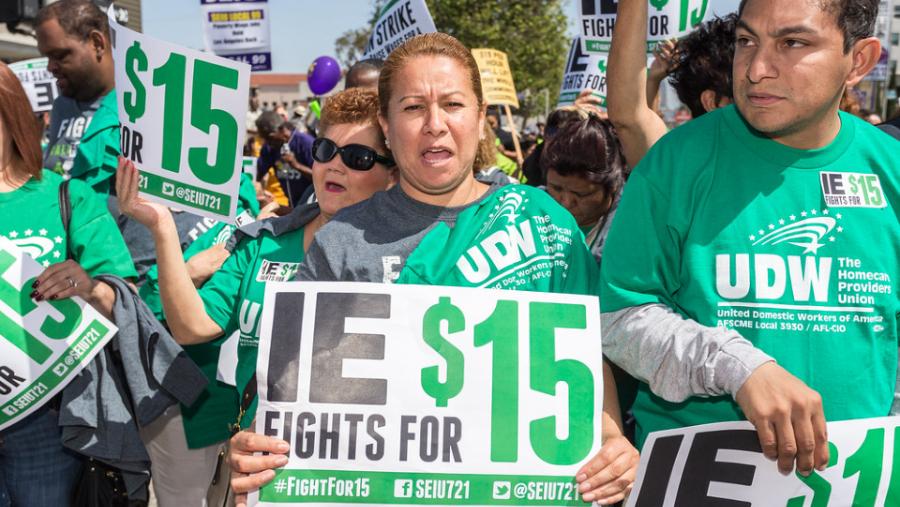 Congressional Democrats took a beating in the 2020 elections, but voters passed several progressive economic ballot initiatives in their states despite opposition from business groups and Charles Koch's political network.

In Florida, the minimum wage is $8.56 per hour, higher than the federal minimum wage of $7.25 but still still leaving full-time workers with an annual income only 40 percent above the poverty line. But increasing this paltry wage was not acceptable to Republicans and business interests in the state.

The Miami Dade Republican Party, several trade groups, the anti-tax nonprofit Americans for Tax Reform, and the Charles Koch-funded Americans for Prosperity (AFP) all opposed a ballot measure, Amendment 2, this year to amend the state constitution to gradually increase the minimum wage to $15 per hour. Florida voters felt differently, passing the measure with 61 percent of the vote. As a result, Florida's minimum wage will increase to $10 per hour in September 2021 and end up at $15 per hour in 2026.

AFP managed two ad campaigns against Amendment 2. The first, in October, included a digital ad, a radio ad, and a mailer. In early November, the group launched a six-figure digital ad campaign.

To defend its stance against a minimum wage increase, AFP harnessed the power of the Koch-funded think tank network. AFP cited a study by the Koch-backed Competitive Enterprise Institute and an article published by the Koch-funded libertarian think tank Reason. AFP also cited an academic study that Save Florida Jobs financed.

Proponents of Amendment 2 appear to have spent far more on the measure than its opponents.

There have been 21 ballot measures to increase the minimum wage over the past two decades, and voters have approved all of them. In addition to automatic cost-of-living increases in seven states, minimum wages went up in 14 states this year thanks to previously enacted legislation or ballot measures.

While the Colorado legislature couldn't pass paid family and medical leave in the last six years, voters in Colorado did this November with 57 percent of the vote. Starting in 2024, all workers—including self-employed residents and gig workers—will be able to access up to $1,100 per week for as many as 12 weeks to care for a new child, themselves, or a sick family member.

The campaign supporting the measure, Proposition 118, was far better financed than the opposition. Washington, D.C.-based groups donated the bulk of the committee's funding, including North Fund ($4.4 million) and the Sixteen Thirty Fund ($3 million). Unions also pumped in significant funds, including the SEIU ($224,000 via three separate committees) and the United Food and Commercial Workers ($100,000). The Democratic Legislative Campaign Committee contributed $60,000 from two accounts.

Business associations didn't like the prospect of workers getting paid time off to care for their families, with the Colorado Chamber of Commerce, the National Federation of Independent Business, the Denver Metro Chamber of Commerce, and numerous other groups opposing Proposition 118. Employees and employers will evenly split payments into the fund that provides the benefits.

Not Now Colorado, the committee opposing Proposition 118, spent close to $750,000. According to state campaign finance records, its top donors were the Colorado Construction Industry Coalition, which donated $70,000, the Colorado Association of Commerce and Industry ($65,000), Associated General Contractors of Colorado ($63,500), Rocky Mountain Mechanical Contractors Association ($52,500), and Colorado Concern, a coalition of corporate CEOs.

In Arizona, where teacher pay is nearly the worst in the nation, voters approved a tax increase on well-off residents to help out their teachers as well as student support staff and bus drivers. Proposition 208, or the Invest in Education Act, will impose a 3.5 percent tax surcharge on taxable income over $250,000 for individuals and $500,000 for couples to fund the salary increases.

The tax increase was opposed by a host of business groups such as the U.S. Chamber of Commerce, the Arizona Chamber of Commerce and Industry, the National Federation for Independent Business. Americans for Prosperity, the Koch-funded Arizona Free Enterprise Club, Americans for Tax Reform, and numerous elected officials including GOP Gov. Doug Doucey and Attorney General Mark Brnovich also fought the measure.

The Koch-funded Goldwater Institute, which is based in Arizona, attacked the proposition numerous times and published a paper on its allegedly negative effects, characterizing marginally better teacher and bus driver pay as a "special interest."

One committee opposing Proposition 208, Arizonans for Great Schools and a Strong Economy, received $540,000 from SAC Holding Corporation, a self-storage facility owner based in Mesa, Arizona. The committee also scored $350,000 from the Arizona Chamber of Commerce and other large donations, including:

Despite the significant opposition from moneyed interests, supporters of the tax increase had more money behind them.

One hundred and fifty-two years after the Emancipation Proclamation, Nebraska and Utah voters overwhelmingly backed measures to finally remove a provision in their state constitutions that until now permitted slavery as a penalty for breaking the law. Shockingly, 32 percent of Nebraskans and 20 percent of Utahns voted against ending slavery as a form of punishment.

Not all of the state economic justice measures on the ballot succeeded this month. In Illinois, right-wing billionaires battled wealthy liberals and unions over a state constitutional amendment, the Illinois Allow for Graduated Income Tax Amendment, to remove the constitutional mandate for a flat income tax and allow the legislature to create a progressive system.

The biggest money battle was a faceoff between the state's incumbent Democratic governor, billionaire J.B. Pritzker, and Ken Griffin, CEO of Chicago-based hedge fund Citadel, also a billionaire. Pritzker donated $58 million to the primary committee backing the proposition, Vote Yes For Fairness. Meanwhile, Griffin, a GOP megadonor who also gave $45 million to outside groups spending on federal elections, contributed nearly $54 million to the main committee opposing the proposition, the Coalition to Stop the Proposed Tax Hike.

Other wealthy Republican donors joined Griffin in the fight to keep their state income taxes low, including:

For years, Americans for Prosperity has opposed the idea of scrapping the flat tax. In 2019, the group argued against a graduated tax system by exaggerating its potential effects. "Make no mistake, this is a tax hike on Illinois job creators that will only drive jobs out of our state and hasten residents' departure," said AFP-Illinois' state director. A year earlier, the group produced an ad against progressive taxation.

Aside from Gov. Pritzker's huge contributions, the coalition in favor of the tax measure benefited from $850,000 from the National Education Association, close to $700,000 from the AARP, $500,000 each from liberal funders the Strategic Victory Fund and the Omidyar Network, and additional six-figure contributions from the American Federation of Teachers, AFSCME Illinois Council No. 31, and the SEIU.