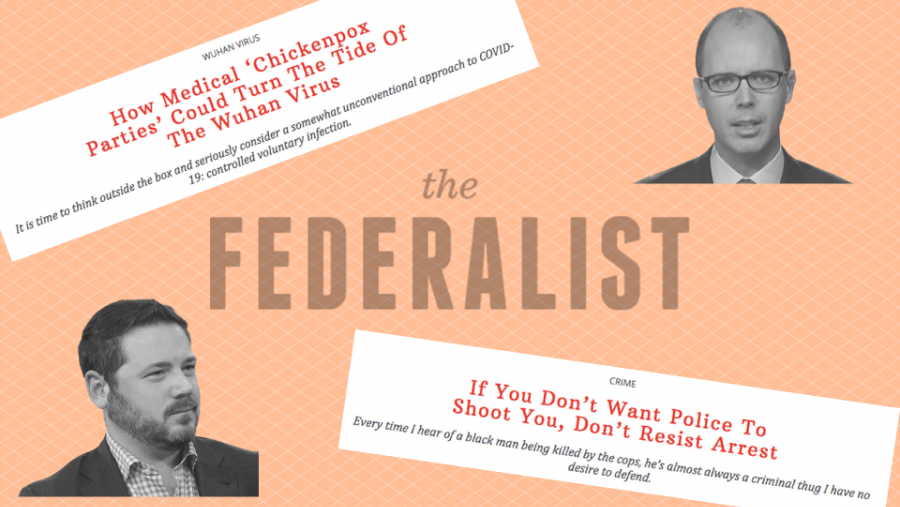 The Center for Democracy (CMD) has obtained the first 990 tax filing of a new nonprofit linked to the right-wing digital publication The Federalist, as well as the most recent filing from the Real Clear Foundation, another media nonprofit that has ties to The Federalist.

For years, many have wondered who funds The Federalist, which publishes far-right content including vigorous defenses of Donald Trump, coronavirus conspiracy theories, and racist posts that previously fell under a "black crime" tag. Newsguard, which evaluates websites for accuracy, gives The Federalist a rating of 12.5 out of 100, saying it "severely violates basic journalistic standards."

In 2019, the FDRLST Media Foundation received donations totaling $799,000. CMD's past reporting uncovered the sources for all but $100,000 of that amount. Billionaire businessman and right-wing political donor Richard Uihlein, who owns the shipping supply company Uline, gave $400,000 to the FDRLST Media Foundation through his family foundation, the Ed Uihlein Family Foundation. Conservative funding vehicle DonorsTrust contributed $249,000, and the Thomas W. Smith Foundation added $150,000.

These donations make it clear that some of the most deep-pocketed right-wing donors see The Federalist as a means to advance their pro-corporate, socially conservative agendas.

The FDRLST Media Foundation is a 501(c)(3) nonprofit formed in 2018 with a mission "to support journalism on policy and cultural issues in the public interest" and "to train and educate aspiring journalists." That year, it took in less than $50,000 and thus was not required to file a public tax form, so the 2019 Form 990 obtained by CMD is its first public tax filing.

The three known donors to the FDRLST Media Foundation also fund the nonprofit behind the news site RealClearPolitics. The Real Clear Foundation has been around for a number of years and took in close to $3.8 million in 2019, roughly $500,000 more than the year before.

RealClear recently teamed up with the State Policy Network, a web of right-wing think tanks that shares these same donors and is closely tied to the pay-for-play business lobbying group the American Legislative Exchange Council.

The three known donors to the FDRLST Media Foundation are all linked to domestic extremists.

DonorsTrust, the "dark money ATM of the conservative movement," is a donor-advised fund sponsor that Republican billionaires such as Charles Koch, Robert Mercer, and the DeVos family use to donate millions of dollars to conservative causes. When they contribute through DonorsTrust, their identities are shielded from the public.

In 2019, DonorsTrust gave $1.5 million to the foundation behind white nationalist hate group VDARE, the largest known donation to a white nationalist group in the U.S. It also gave $10,500 to the New Century Foundation, which funds Jared Taylor's white nationalist magazine, American Renaissance. In addition, DonorsTrust regularly funds anti-Muslim and anti-LGBTQ hate groups, having poured over $3 million into these organizations in 2018, as CMD reported.

At DonorsTrust, its board of directors determines the nonprofits that are eligible for its charity, so the group's leaders approved these extremist groups.

Uihlein is one of the Republican Party's most prolific political donors, having given $65 million to conservative outside spending groups, including the pro-Trump America First Action, in the 2020 elections. He is the primary funder of the PAC of the Tea Party Patriots, which participated in the "March to Save America" that culminated in the deadly Jan. 6 insurrection at the U.S. Capitol.

In addition to shared funders, RealClear and The Federalist have overlapping executives and board members.

Records from the Washington, D.C. secretary of state have listed David DesRosiers, the publisher of Real Clear Politics and the former executive vice president of the Manhattan Institute, as a director of the FDRLST Media Foundation.

In 2019, The Federalist's senior editor Mollie Hemingway was president of the foundation. Her husband, Mark, was secretary, and RealClearPolitics senior politics editor Nicholas Nordseth was treasurer.

Davis and Domenech have ties to other publications and think tanks in the same right-wing media sphere as RealClear and The Federalist. Davis was previously chief financial officer of The Daily Caller. Domenech, who is married to Meghan McCain, co-founded RedState and was previously a managing editor for health care policy at the Heartland Institute, a climate denial "think tank" funded by GOP megadonors such as Koch, Mercer, and Uihlein, as well as DonorsTrust and and its sister fund, Donors Capital Fund.