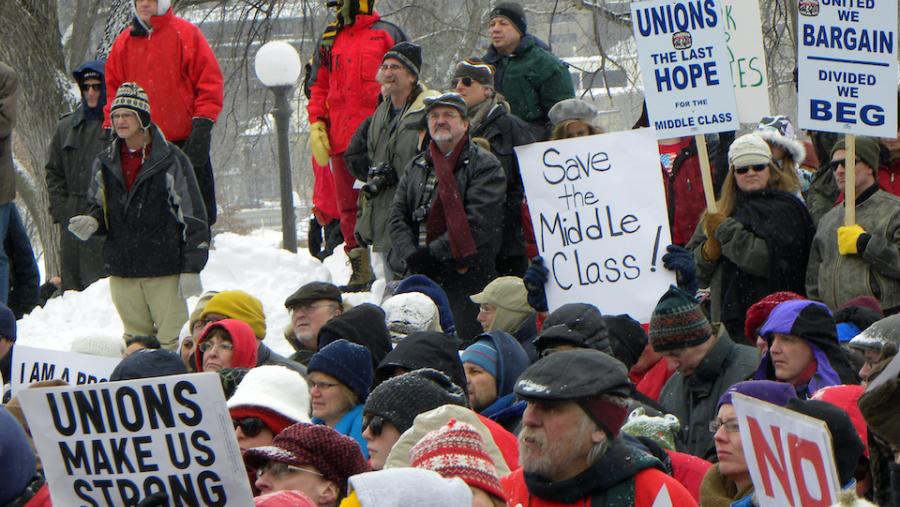 The American Legislative Exchange Council (ALEC)’s advocacy organization ALEC Action published a letter on its website to members of Congress urging them to oppose the Protecting the Right to Organize Act (PRO Act), but the website is missing something…the signatures.

At least 100 ALEC-tied state lawmakers from 30 states signed onto the letter as of April 26, according to a copy obtained by the Center for Media and Democracy (CMD). The final letter sent may have included more as the email the letter was attached to a request for signatures.

ALEC, a pay-to-play operation where legislators and corporate lobbyists meet behind closed doors to adopt model legislation on a broad range of public policy issues, has worked tirelessly to undermine labor rights in the name of "free speech" and "worker freedom," terms that ALEC coaches its legislative members to use in pushing anti-union bills with a goal of defunding the labor movement and its ability to support the Democratic Party.

Indeed, at ALEC's annual meeting, being held in Salt Lake City this week, ALEC legislators and corporations will be considering a proposed model bill to outlaw collective bargaining by public employees.

Consistent with its anti-union stance, the ALEC letter asserts that the PRO Act will "harm the individual rights of workers in order to increase the coercive power of labor unions." In fact, the bill would empower workers to unionize and negotiate better wages and working conditions, and strengthen enforcement of workers' rights.

The PRO Act also addresses the widespread misclassification of workers in labor law, which is used to deprive millions of workers of their rights to organize and collectively bargain, through an "ABC" test employers would be required to follow.

In her email, ALEC Action's Sarah Wall states that this "would annihilate your constituents' ability to freelance or earn a living as independent contractors," but the bill includes no language that would prohibit independent contractor or "gig" work, or make any change at all for these workers other than giving them full rights under labor law.

ALEC recently launched an Independent Contractor Working Group under its Commerce, Insurance and Economic Development Task Force to develop model legislation on the issue and to generate opposition to the PRO Act.  An email obtained from that working group obtained by CMD shows that ALEC is working in lockstep with the billionaire Charles Koch's astroturf group Americans for Prosperity, the Koch-linked front group Independent Women's Voice, the U.S. Chamber of Commerce, and longtime union foe F. Vincent Vernuccio's the Institute for the American Worker to push out their messaging points and "collected stories and testimonials from workers affected by reclassification."

Last December, ALEC held a workshop at its States and Nation Policy Summit on independent contractor reforms enacted in California and what could be done to stop similar measures elsewhere. Featured speaker Jeff Hanscom with the International Franchise Association stated "this could be coming to a red state near you," and that they are working with ALEC to "develop some model legislation that we think will hopefully forestall future AB 5 copycats in other states."

California passed AB 5 in 2019, which significantly reduced the number of workers that qualified as independent contractors. Uber and Lyft attempted to argue in court that their drivers do not qualify as employees under the new law, but a California Appeals Court disagreed in October.

That court ruling was overturned when California voters passed Proposition 22 last November in the costliest ballot measure battle in the state's history, thereby allowing companies such as Uber and Lyft to classify app-based drivers in the state as independent contractors

Lyft is a member of NetChoice, an ALEC meeting sponsor that sits on ALEC's Private Enterprise Board of Directors and chairs ALEC's Communications and Technology Task Force.

ALEC's model Uniform Worker Classification Act and the Resolution in Support of Independent Contracting were considered at the December meeting and adopted by the Board in January. Both seek to push back against government policies to fix misclassification of employees as independent contractors at the state level.

The Independent Contractor Working Group is considering further revisions to its model policies that would delay any possible reclassifications to a year after enactment and to change language so that informal contractor relationships are not "unintentionally" classified as employer/employee relationships, an email acquired by CMD details.

In addition to the International Franchise Association, Americans for Prosperity, the US Telecom Association, NetChoice, National Federation of Independent Business, UPS, the Cellular Telecommunications and Internet Association (CTIA), and many others sent representatives to attend the workshop at ALEC’s December meeting.

If passed, the PRO Act would also upend the ALEC-championed "Right-to-Work" laws in 27 states that require unions to provide the same representation and workplace services to all workers in a workplace, but make contributing to the cost of that representation optional. Despite the name, "right to work" laws do not create a right to employment, do nothing to improve a person's odds of getting a job, and do not create jobs.

These ALEC-pushed statutes have led to lower wages, lower rates of health insurance coverage, less home ownership, more living below the poverty line, and more dangerous working conditions in comparison to states that have not enacted them, a recent study from the Illinois Economic Policy Institute and the University of Illinois's Project for Middle Class Renewal found.

Many of the anti-union bills circulating in state houses this year, including "Right-to-Work" bills that failed in Montana and New Hampshire, are based on ALEC model bills.

In addition to organizing a sign on letter opposing the PRO Act, ALEC's Sarah Wall placed an OpEd on behalf of member Rep. Becky Nutt (R) that recycles many of the talking points.

"Success! We pitched out your op-ed and it was picked up by the Arizona Daily Independent," Wall writes in an email obtained by CMD.

The ALEC opinion piece applauds U.S. Senators from Arizona Kyrsten Sinema (D) and Mark Kelly (D) for not sponsoring the PRO Act, despite unions engaging in what Nutt calls a "play-for-pay" scheme.