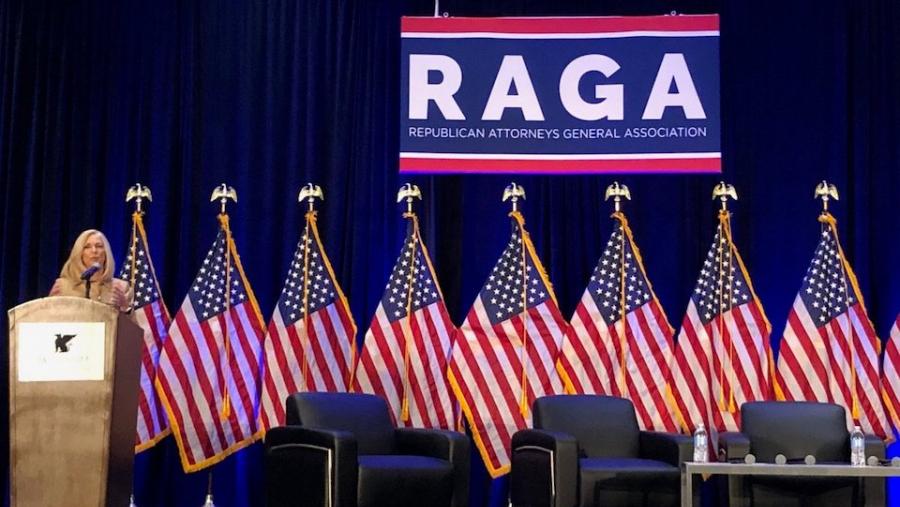 The Republican Attorneys General Association (RAGA) reported $6.7 million in revenue in the first half of 2021, according to a mid-year IRS filing examined by the Center for Media and Democracy (CMD), $2.5 million of which came from came from a dark money group run by Trump's go-to man for packing the federal courts with right-wing judges.

The total is down from the $8.5 million RAGA brought in the first six months of the last off-year, 2019.

RAGA accepts unlimited contributions from corporations and special interest groups such as Koch Industries, the National Rifle Association, and Pfizer, much of which is used to get Republican attorneys general elected.

Together with its 501(c)(4) affiliate, Rule of Law Defense Fund (RLDF), RAGA runs a cash-for-influence operation that coordinates the official actions of Republican state attorneys general and sells access to those AGs and their staff to its corporate funders.

RAGA has seen an exodus of long-term staffers and leadership after Peter Bisbee, who was responsible for generating robocalls to turn people out for the Jan. 6 Capitol insurrection, was named the group's new executive director.

As RLDF Executive Director, Pete Bisbee approved the robocall expenditure, and was the only other person accountable for RLDF involvement in the January 6 events. Over the last few months, I have fielded, reassured and assuaged concerns from our core donor base on the future direction of our organization. The result of the executive committee vote to nominate Pete as RAGA’s Executive Director is a decision I cannot defend.

Reportedly a donor threatened to withhold a contribution to RLDF if it did not encourage people to attend the March to Save America rally on January. "We will march to the Capitol building and call on Congress to stop the steal," and "[w]e are hoping patriots like you will join us," the message to an unknown number of recipients said.

RAGA and RLDF are forever tied to what followed the March to Save America rally, the violent insurrection on the Capitol.

The Concord Fund was RAGA’s largest donor in 2020, giving a total of $3 million.

Charles Koch's Americans for Prosperity, Koch Industries, and Koch Companies Public Sector have given a combined total of $255,265 in 2021, making his operations the second largest donor to the cash-for-influence group.

RAGA is also a Koch customer. Its IRS filing details $4,000 for a subscription to the Koch voter data operation i360.

RAGA's largest individual donor so far this year is Ambassador C. Boyden Gray, who has given $200,000. Gray is a founding partner of the law and strategy firm Boyden Gray & Associates, and serves on the Federalist Society’s board of directors with Leo.